By believing in herself—perfecting the art of storytelling through design—Sharona Wolff founded Atelier Wolff, based in the San Francisco Bay area. A student of cartography, engineering, and computer-aided design, her passion and talent for science meets an eye for unique gemstone combinations. Colorful statement pieces set in 22K gold jewelry are her signature. With lively energy, she says, “I wouldn’t dare work in anything less.” Sharona was raised by a geologist and an environmentalist, influencing her use of ancient metalsmithing techniques, along with drawing from cultural themes and influences of today. Atelier Wolff’s distinguishable design and dedication to perfection are truly jaw-dropping. Read along as Sharona shares some of her inspiration and motivation, as well as stories behind the jewelry. 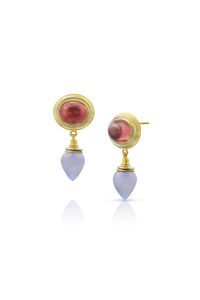 It is not a secret that the cultures of the countries where you have lived, traveled, and worked have shaped your eye for designing collections. Could you tell us about one or two places and stories that directly influenced the aesthetic of your line?

I grew up in mining, as my father was an exploration geologist who specialized in gold and base metals, but his first love was gold. So, I spent much of my childhood in many really remote places, often amongst First Nations peoples, where I learned their ancient cultures and stories surrounded by gold and gemstones. I’m not joking when I say that I learned how to use a Geiger counter long before I first saw a remote for a TV – when your father is a geologist, that’s how it is.

When I was nine, I somehow inherited several pieces of Etruscan Revival jewelry, dating from the late 1800s. Who gives a nine-year-old such valuable piece? It’s pretty remarkable I didn’t lose them in one of the many moves. I was fascinated by the intricate wirework and granulation that was so different from the contemporary jewelry of the time. I wanted to know how they were made, and learn the history of the Etruscans. My father told me all about the gold, he was an absolute mine of information and taught me how to pan and smelt it (I was his worst gold panner ever!). I haunted the museums in all the places I moved to, and this gave me the opportunity to study ancient cultures and their jewelry. I found my creative home! I decided that this was the jewelry I wanted to wear, and given most of it was already in museums and private collections, I would have to make my own. I work in 22K gold; I wouldn’t dare work in anything less, having been taught from a child that any lower karat was quote, “not gold” (that’s what having a geologist in the family does for you).

When people wear your jewelry, how do you want it to speak to them or make them feel?

When people wear a piece of my jewelry, I want them to be able to see themselves and their stories reflected in it. I want them to feel confident and empowered, to have that ‘this is me’ feeling. After all, wearing jewelry is really just another way of expressing something intensely personal about yourself.

Which piece of jewelry that you own, and that you have designed, are you most connected to? What are the stories behind those pieces?

I’ll never forget the third piece of jewelry I made as a student goldsmith. It was a ring, a bezel-set central and side stone ring, Etruscan Revival style with a lot of wirework in a custom alloyed pale pink 18K gold. When finished, the ring weighed approximately 16 grams and the stone was an 11ct. blueberry colored tanzanite. So, I went big. I had the great fortune to be taught by a Florentine master goldsmith, and he was extremely dubious that I could do it; actually, he thought it was going to be a complete disaster. He tried his absolute best to talk me out of the whole idea and point me in the direction of a significantly less challenging project. I refused to be persuaded and besides, the simpler rings he wanted me to try looked boring, and I wasn’t doing boring! So, I talked him into letting me make my ring – that was so much talking and a fair bit of it in Italian! Fifty-one separate solders, my third piece ever, what could possibly go wrong? Quite a lot actually, and I learned an awful lot about soldering. My teacher? He told me afterward that I’d really surprised him; he was expecting disaster, molten metal, cracked stones and it just didn’t happen. There was one mistake that we turned into a feature that I use on some designs to this day. I still wear that ring, and each time I do, I am reminded of how far I’ve grown as a goldsmith since then.

What was the most challenging piece that you have ever created? Why? 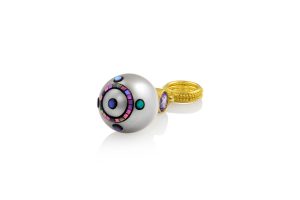 Hmm, there have been a few challenges, and I’m sure there will be a few more! I think the one that comes to mind though is a pair of pearl earrings. To look at them, they don’t look especially challenging: there’s no complex stone setting, no complex shapes, the actual design is simple. Getting there though was anything but simple. The challenge for these earrings was how to showcase a gem, in this case, a pearl, that’s not always regarded as having high fashion, contemporary and youthful appeal – how to tempt a non-pearl collector to start collecting. I decided to make my designs directly in gold, even if I ended up discarding them as I’d be able to see exactly what they looked and felt like. For designs that didn’t work out, it would be a simple matter of melting the discards down later. The pile of discards started growing in the crucible, but at least I was taking away what I didn’t like. I went through eight different designs and discarded the lot before starting the ninth. I finally gave up all ideas and just gave myself a blank slate to begin from and let instinct take over – that’s when it all came together and I nailed the ninth. It was simple, it was elegant, there was nothing left to take away, which I think is the essence of good design. I realized later that they were subconsciously inspired by one of my favorite pairs of earrings – Etruscan from the 4th century BC, which happen to look simple, but really aren’t. 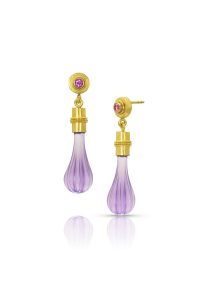 Do you have a favorite gemstone color combination you love to work with and source from? What draws you to these gems?

Such a hard question, as I love color and I love all gemstones! I think gemstones are the earth’s color palette and way of showing its light. I’m particularly fond of the combination of spinel with garnets, or spinel with tourmalines. Spinel comes in such a range of colors and has an almost metallic luster to them. I often use the vivid pinks with juicy mandarin garnets. Tourmaline and its range of colors is another favorite, and they feature in many of my pieces, from the beautiful sea green and the azure blue of cuprian tourmaline, from Mozambique through to the distinctive sparkling pinks and neon blues from Afghanistan. Rock crystal is another stone I use a lot, whether its polished, sandblasted, gilded, or carved, and I love how it remains just as relevant today as it was in antiquity. I have a particular love for the gemstones of Africa, influenced by my family’s long connection to Ghana, Congo, and Zimbabwe, and I try to use them whenever I can. 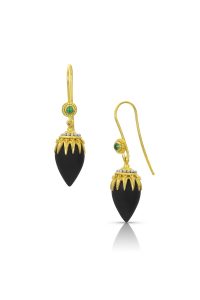 How would you best describe your style?

My style is confident, luxurious, and timeless.

If one of your pieces were to be part of a museum collection, which museum and piece would you want to have procured for future visitors? How does it exemplify your style or the time in which you worked?

Definitely the Victoria & Albert Museum in London. To me, the V&A is one of the world’s most magnificent museums of art and design and represents 5,000 odd years of humanity’s creativity, so that’s where I would want my piece to find a home. Which piece? I think I’d choose my Trumpet earrings, as their design has its roots in antiquity, the technology I used to fabricate them is the same technology that was used 4,000 years ago, the granules are all I went through eight different designs and discarded the lot made by hand. Yet, if you remove the ear wire, the central stone, turn the trumpet upside down, there’s a pop-art style bejeweled golf tee that’s contemporary and just a little over the top. I have actually made one, complete with a rock crystal golf ball. I like the juxtaposition. 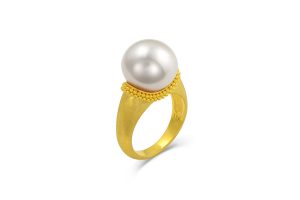 Personally, and professionally, what two accomplishments are you most proud of?

Moving from my corporate life in technology to an infinitely more satisfying and creative life as a goldsmith. That marked the achievement of both long term personal and professional goals. I’ve never looked back!

Do you have a mantra, or is there a famous quote that speaks to your work and how you live your life?

I do, it’s from Theodore Roosevelt “Believe you can and you’re halfway there.”

Visit  http://atelierwolff.com/ to find out more about the Atelier Wolff and check out their stunning pieces.

Shooting for the Stars, with Martha Seely