The Jet Set Life: An Interview with Sarah Caldwell Steel

Sarah Caldwell Steele is a geologist and gemologist who has been leading the trade in consideration of various issues regarding the identification and classification of jet. Recently, she spoke with Pietra PR to highlight some of her research, explaining the limits of how we have defined and classified the material to date. Sarah works in Whitby, UK, at her store, Ebor Jetworks, creating a stunning array of contemporary jet jewelry for everyday wear. Here, she breaks down all you need to know about jet today…

Sarah, you are the Queen of Jet! For those who perhaps aren’t as familiar with the material, can you discuss the gemological definition/origin of jet and also explain why that is problematic?

True jet was defined by Stach (1927) as “being formed from drifted wood which has been secondarily impregnated with bitumen from its surrounding sedimentary environment.” As a term, ‘jet’ therefore should be used only when describing the material which formed when large wood fragments were deposited in an aquatic, anoxic sediments which had a capability to generate hydrocarbons. Unfortunately, over the years the name ‘jet’ has been used as a generic term to describe anything black, especially in relation to Victorian mourning jewellery. I’ve encountered over two dozen materials including natural, semi-synthetic, fully synthetic and reconstituted now sold under the umbrella term ‘jet’. From a gemmology perspective, we probably know less about jet than any other gem group. The lack of a provenancing tool has led to the situation today in which the consumer is often misled into buying a stimulant rather than indigenous jet materials. This obviously impacts those of us who work jet as a way of life. There are five indigenous groups still working jet today in the Americas, Europe and Asia. As a professional gemmologist but also, more importantly a lapidary specialising in our British material – Whitby Jet, I feel a huge responsibility to ensure that my own industry is protected ensuring the continuation of a 5,500-year tradition in the British Isles and also to protect the others working jet as a way of life elsewhere in world.

How often do you collect jet samples, and what is the process?

Whitby Jet has been mined in North Yorkshire for at least 1,500 years. From a modern perspective, the last jet mines in North Yorkshire closed in 1890’s following the collapse of the Victorian industry which was in part due to the influx of foreign materials into the marketplace. We have eight miles of coastal outcrop bearing Whitby Jet and are now restricted to collecting jet eroded from the cliffs and then brought in on the tide. It’s not an exact science but one which is weather and tide dependent. If we are patient the sea will deliver jet to us. Most of the Whitby shops rely on people to comb the beaches daily and bring jet into us. This method however is stretched to capacity during periods of high demand as of present.

From a European perspective, people have desired jet for beads and amulets since the Upper Palaeolithic. With such an ancient material it’s hardly surprising that people are dawn to it. Maybe there is something deep in the human psyche that still attracts us to it, and here in Whitby people travel to us specifically to buy jet, a type of pilgrimage perhaps. Jet is not therefore just any old gemstone, it has huge cultural, historical and anthropological importance to the communities who use it. Its meaning and importance to our target market at The Ebor Jetworks is therefore of much more importance than following a here today, gone tomorrow jewellery trend. 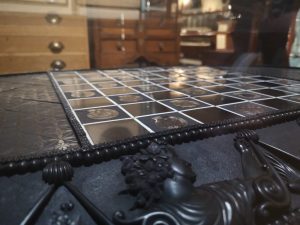 At your retail store, The Ebor Jetworks, you create custom pieces in Whitby Jet. What is the contemporary demand for the material and how do you find end consumers want to wear it?

I have been researching Whitby Jet for the past twenty years. I have degree in Geology and have since become a gemmologist to try to understand the gem trade perspective on jet. I discovered early on that it is simply not possible to understand jet within the context of the gemmological education students currently receive. I personally have a problem with the term ‘organic gem’ in relation to jet. It is much better described as a biogenic material as it is formed as a by-product of biological process. There are many other black biogenic materials which have been described over the years as jet and in order to fully understand what we are dealing with, I am proposing that we need a branch of ‘hydrocarbon gemmology’ to fully understand these often complex materials used in jewellery both now, and those we encounter in the archaeological record.

You have been doing a lot of research regarding the origin and composition of Whitby jet, and other materials called jet or imitating jet. How do you believe we should be rethinking how we classify it?

Alongside my independent research into gem quality hydrocarbons I have been fortunate enough to meet and work with other people passionate about jet but coming from a different academic perspective. I am currently working with Dr Richard Hark, a chemist based at the Institute for the Preservation of Cultural Heritage at Yale University and David Givens and Michael Lanvin both archaeologist at Historic Jamestown, Virginia in order to identify the original of jet like artefacts found in early C17th Jamestown deposits. Many of the techniques we are using are new from a gemmology perspective due to the fact that almost all the elements in jet are light on the periodic table, so our go-to gem testing techniques are not diagnostic from a provenancing perspective. We are hoping to publish or research early 2019. To continue and expand this work I am returning to Durham University in October to make my work on my PhD thesis. 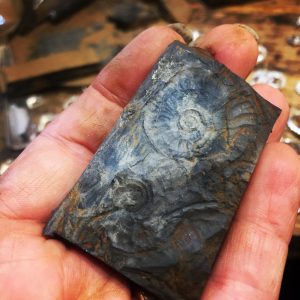 A piece of rough Whitby Jet prior to manufacture.

What are the biggest misconceptions about jet today?

I think the biggest misconception about jet today is its association with mourning. Whitby Jet had been used as amulets for protection and to bring good luck for 5,400 years prior to the Victorian mourning trend that swept the British Empire in the C19th. No other gemstone in history has experienced such a meteoritic rise to fame followed by catastrophic collapse as the Victorian Whitby Jet Industry. The collapse of the trade brought shame on the town of Whitby and left many master craftsmen in the workhouse. We are still trying to recover from this and it’s important for people to understand the wider cultural and historic importance of this ancient gemstone outside of the constraints of Victorian mourning etiquette.

Let’s talk about care! If someone decides to wear jet, how should one best maintain it?

From a care perspective Whitby Jet is easy. We use ultrasonic to clean all our pieces prior to sale. It is also incredibly stable so not affected by most solvents. It is however triboelectric so attracts a static electrical charge and as a result grease can build on the surface of antique pieces. This can easily be removed with an iron oxide polish such as rouge. Caveat emptor however, as much of the jet from other sources in the world cannot boast the enhanced stability or durability of Whitby Jet. If you are unsure of the identification, I’d advise caution.

What is the greatest historical piece created in jet, in your opinion. Can you share the story behind it?

I am lucky to be the Consultant Gemmologist at Whitby Museum, home to the country’s most important historic Whitby Jet collection. The star piece is the John Sherwood Chess Table. This was started in 1895 for Queen Victoria’s diamond jubilee. It took longer than expected however and the Queen didn’t receive it. It was described in contemporary accounts as “the crowning triumph of the Jet Age – the most beautiful object of its kind ever made” – a claim I wouldn’t dispute. It’s simply breath-taking as an example of C19th stone engraving. 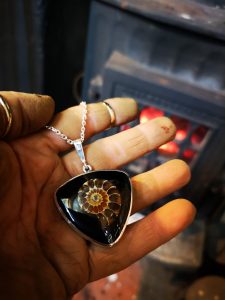 Of all the jewelry you have collected and made, what is the most meaningful jet masterpiece in your collection, and can you share the story behind it?

I also have my own micro-museum of Whitby Jet in my office at Whitby. Personally, my most prized piece is a Whitby Jet portrait medallion of Dante by E.H. Greenbury. E.H. Greenbury was an exceptional portrait artist and this particular piece is one of only eight documented plaques attributed to him. The plaque was purchased on eBay a couple of years ago for the sum of £4. It belongs in a national collection, but the ridiculous price tag highlights the problem of the ignorance of the public to this rare and historic gemstone.