Jennifer Trask believes that art objects have the capacity to provoke curiosity, speculation, and wonder in our day-to-day lives, and strives to capture that feeling in her work. A passion for traditional decorative arts and the museum setting, as well as a background in biology, underscore the conceit behind Trask’s constructions. A reflection of what inspires her is apparent in Descartes’ description of Wonder, which he considered to be the first of the passions: “…a sudden surprise of the soul which makes it tend to consider attentively those objects which seem to it rare and extraordinary.” WONDER, as a noun, and as a verb. Jennifer Trask now lives in the Lake Tahoe area, working as a full-time studio artist. 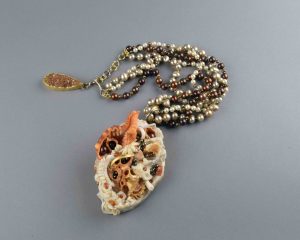 In a few words, how would you describe your style?

I have never been asked that question before. I’ve never thought that I have a style, the word strikes me as branding, or more appropriate to fashion. My working style is another thing. I work slowly, let the work evolve organically. It’s a labor intensive process, often built by both addition and subtraction – layering – utilizing many techniques I learned as a jeweler.

You are a very dynamic artist, who creates both decorative and wearable pieces. What fascinates you the most in the process of designing and creating wearable art?

I think my engagement is equal for both formats. Given the scale difference there’s a sense of more immediate gratification. Instead of months to a year(s), wearable pieces take days to months. I also like the intimacy of the scale. Most sculptures are not touched, only looked at. These wearable pieces are small works of art that can be examined, the weight, the textures felt and you can take them with you!

How do you want people to feel when they wear the pieces you designed?

I want them to feel more of whatever feeling drew them to that artwork – whatever it is. Empowered, beautiful, mysterious, intriguing. Wearing jewelry is a statement, a badge, an identifier, or an instigator of thought and conversation.

When did you first notice that you could use your knowledge of metalsmithing along with your interest in found materials like bone, wood, and antlers?

In the late 80’s, while I was in art school, there were many studio jewelers who used unusual materials. Since the beginning of human history we have been ornamenting ourselves and making talismans from found and organic materials. Bones, shells, beetles, feathers…

Plus, we baby artists at MassArt were encouraged to cross disciplines, so experimenting with other materials and techniques is second nature. Like so many other makers, I use multiple disciplines to hone my vision. I paint, use a digital camera, make the odd assemblage, and garden (it can be an art form!). I have always worked with found materials and collected odd things. Ever since I can recall, I have been fascinated by the complexities of nature – growth patterns, the cycles of life, the fragility and tenacity of all living things.

How would you describe the difference between the creative process of the wearable art you design (jewelry) and the sculptural, and wall pieces?

Making wearable pieces means making something functional, which has a unique set of structural and technical demands. In some ways it’s more challenging to make a wearable piece. Durability matters even more, hinges or clasps have to be reliable, and comfort matters. Collectors will not buy a piece if it isn’t easy to wear or put on and take off. 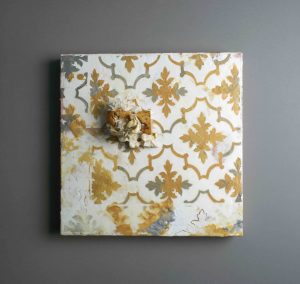 Your 3D wall pieces, just like all of your pieces, are unique and have a natural elegance, partly because of the techniques and materials you use. Is there something about the art you create that you are most proud of?

I’m striving for a believable illusion. I’m happy when I can look at something and say, that looks like it was always here, it occurred naturally. If people walk up to the piece and walk away with questions, a shift in perspective, a sense of wonder, well, then, I’ve done my job.

In the world of jewelry like any other field, there are people who have specific expertise – master engravers, stone setters, or the like, and now tech has become a big factor. I don’t identify with any one technical skill more than another. That is not to say craftsmanship doesn’t matter – it absolutely does matter. I experiment with materials from paper to stone, encaustic, wood, metal, rust, bone, feathers, shells, and even found objects like a watch fob or a caliper will find its way into the work. I don’t feel beholden to any traditions or techniques, so long as the result is a cohesive and compelling object.

Would you say your work is environment friendly? How do you collect natural materials?

Except for one material, yes. I wish I could find a way to not depend on resin for bonding and blending. Natural glues just don’t hold up. It is supposed to be one of the most archival types out there – I hope it’s true. 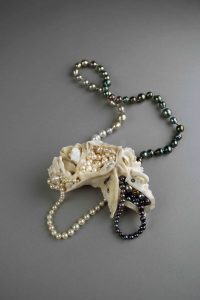 On your website, you mentioned that at some point a question was in the back of your mind, like a mantra, “what is written in our bones?” As an artist who sees beauty in what is different and sometimes imperfect, has the answer to that question changed or evolved for you?

Hopefully it is always changing, evolving.

What inspires you the most in life?

That’s a tough one to answer. So many people, things, ideas, discoveries – how could there be one?
Life itself inspires me. Right down to the basic biology (which is not at all basic).
I often begin new work because of something I read.

King Richard I, or Richard the Lionheart, was known for his courage and military prowess in the Crusades. He met his end at the small castle of Châlus-Chabrol 1199, when shot by a peasant’s crossbow. A surgeon botched the removal of the arrow, and Richard died when the wound became septic.

In keeping with the distribution, entrails were removed and buried in Châlus, in the very cathedral that the fatal arrow was fired from. His body was sent to Fontevraud Abbey to be buried in a grave next to his father’s, but his heart was removed and sent to Rouen. It was embalmed and entombed in a sarcophagus bearing his image in the Church of Notre-Dame in Rouen. During church renovations in the 19th century a small lead box was discovered beneath Richard the Lionheart’s effigy. Inscribed on the lid was the phrase “HIC IACET COR RICARDI REGIS ANGLORUM”—“Here is the heart of Richard, King of England.” Inside the box was a fine, rusty powder, all that remained of the king’s heart. 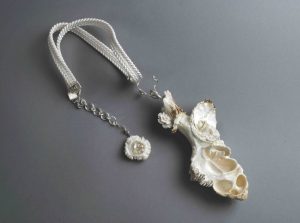 Forensic analysis conducted in 2013 found that the organ had been wrapped in fine linens and perfumed with herbs, flowers, and lime. Traces of rare frankincense were also found on the ancient heart, an allusion to the Christ-like nature of the king. Despite their scientific intrigue and historic importance, these are still human remains and had to be treated with respect. The royal heart was re-inhumed in the coffin at Rouen.

So far, the archaeologists have unearthed hundreds of burials dating back to the late 16th or early 17th centuries, including the well-preserved corpse of a widow named Louise de Quengo, Lady of Brefeillac, who died in 1656. De Quengo’s body had been sealed in a lead coffin, and when that container was opened for an autopsy recently, the woman’s clothes —a cape, linen shirt, wool leg warmers and cork-soled shoes —were remarkably still intact, according to a report in The Guardian.

Inside de Quengo’s coffin, archaeologists also found a lead case containing the heart of her husband, Toussaint Perrien, Knight of Brefeillac. “It was common during that time period to be buried with the heart of a husband or wife,” Dr. Fatima-Zohra Mokrane, a radiologist at Rangueil Hospital at the University Hospital of Toulouse in France, who led the new study, said in a statement. “It’s a very romantic aspect to the burials.”

Many of the works of jewelry and the encaustic panels were made after reading about these discoveries.

Describe your relationship with your materials. Is there anything you are most drawn to working with?

Not that I can say. I can tell you this though – 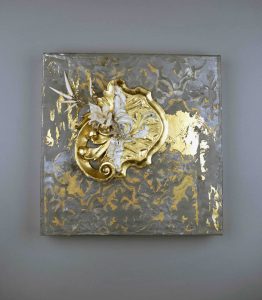 Each piece of wood, bone or antler has a previous history and is entirely unique.
These once living materials often dictate what forms they will accept. They are evidence of a life lived, not a source of macabre thrills for me.
Initially, I was averse to the smell of the bones. Even with a mask and a dust collection system, the smell permeates everything. I was queasy in the studio for maybe a year when I first started making the large wall pieces.

Is there anything that you would like our readers to be expecting from you, such as any new sculptural collections or jewelry pieces that are soon to be released?

There are always things in development. I need at least 7 different projects so I can refocus my attention when I hit a snag. Hence, every surface is covered with notes, sketches, fragments, partially built pieces. I’ve included studio shots and works in progress to give you a sense of what is going on.

One is a wall piece that I’ve taken apart and completely rebuilt, called Undergrowth. In the dense “foliage” there are perhaps snails, larvae, fungi all calcified with roots that reach down, and a heart-form that is either being subsumed or revealed. It’s sort of a Vanitas come to life with new growth, decay, and no way to tell which is winning.

And Accretio isn’t in its ideal setting yet. The traces of gesso on the edges indicate where I’d like to have the wall (eventually) appear to be showing past layer through – like an old house with paper peeling and plaster exposed – as if the object grew from the bones of the house.